This isn’t a regular everyday “come listen to interesting people talk” event, it’s an unconference, where everyone is a participant, there is no audience, and we create the program together. We gather around a theme to have conversations about the things that interest us. We meet new people, make new connections. It will be fun, inclusive, and educational.

I have written over 2 million words over the last 20 years on my blog. At an event for bloggers in Cambridge, MA in 2003 I characterized my blog as much as a very long letter to my son Oliver as anything else: a way for him to understand, later in life, what was going through my head as I was helping to raise him. And, deep under the surface, I think that’s what the blog has remained.

On a day to day basis, I have found that by writing about what I’m doing, where I’m going, how I’m feeling, what I’m making, I can more easily process and integrate it all. I’ve been doing this for so long that it has become simply part of how I live.

Writing in public has also proved to be an invaluable connection-making machine. While my blog is, relatively speaking, little-read and of little influence, those hearty few that have found their way to it have gifted me with a network of local and international friends that my social skills otherwise would have never led to.

Crafting {:} a Life is meant as a jumping off point, not a prescription, and it could encompass everything from sharing needlework techniques to learning to make kimchi to talking about social models of disability.

At a typical conference–”CSS, JavaScript and Equine Encephalitis”–a bunch of speakers are hired to come and stand at the front of rooms and speak to a bunch of people who’ve paid to hear them. There may be an opportunity for questions-and-answers, but these are most often dominated by alpha-people with a point to make, rather than the genuinely curious.

I experienced an epiphany in this regard last fall: I was attending a conference on autism in Charlottetown. It was a well-organized, well-attended conference held in a conference hotel in a traditional conference format: keynote speakers, breakout sessions on particular topics, and so forth. While the speakers were interesting and the topics informative, I realized that the most valuable resource at the conference, the experiences of the several hundred people attentively listening, was, for the most part, untapped. We were there to be listeners, not participants. And, as such, we missed the chance to learn from each other.

Additionally, there appeared to be no autistic people in attendance, leaving the conference free of input from those with the greatest stake in learning more about autism.

After that event I resolved that I was done with the traditional conference format: “if there’s somebody standing in front of slides at the front of the room,” I told myself, “then I’m in the wrong place.”

Fortunately, there are alternatives.

My friends Ton and Elmine, whose “birthday unconferences” I’ve attended, explain the un in unconference in their book like this:

Up until this moment we didn’t talk much about what was on the program.

Except for the general theme we didn’t negotiate with speakers or visitors to give a talk about topic X or Y. This was all done on the morning itself. Some participants announced what they might want to talk about, but on the day itself, that could have changed.

This is the moment in the day that together the participants build the program. To create a schedule with sessions, mainly conversations, in smaller groups.

Building the program together

Create a blank canvas with time slots for each conversation space you have. Use those big pieces of paper you bought.

Having attended two such exercises, I can testify as to how much I enjoyed the co-creating process, the sense of being participant rather than audience, the pleasure of learning unexpected things from unexpected places, the freedom of being able to go off in entirely new directions in the afternoon because of something that happened in the morning.

At the first, “Make Stuff that Matters,” in 2014, he helped me talk about Minecraft and 3D printing: 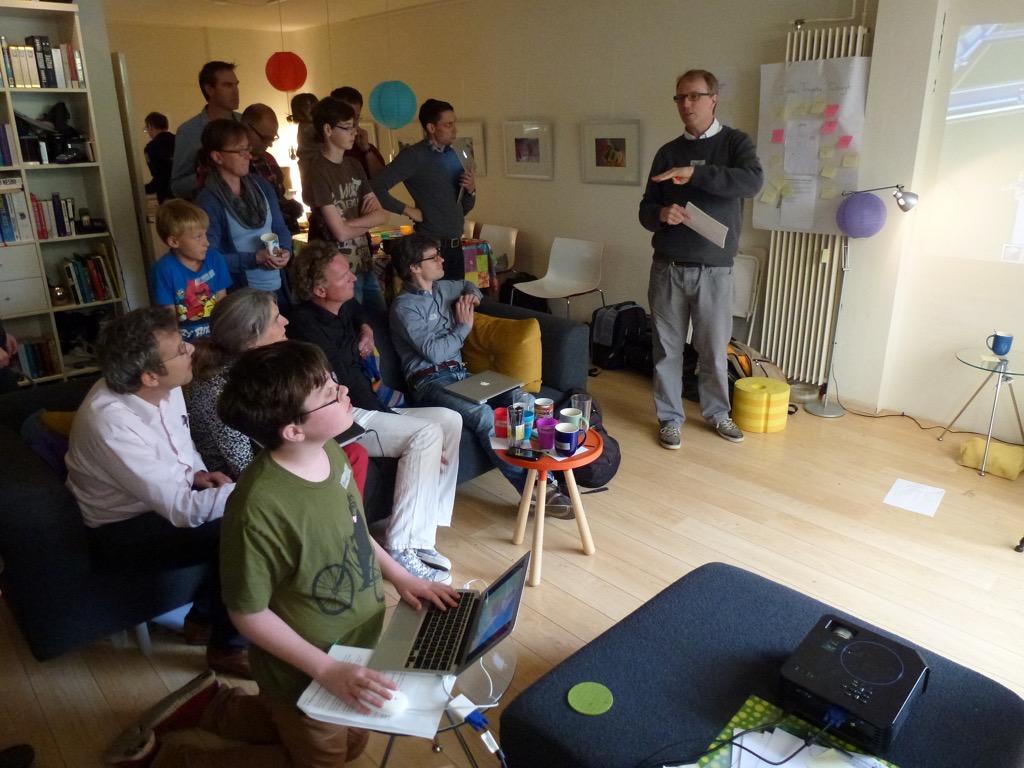 At the second, last August, he proposed and presented his own talk, on the surveillance society and “smart” speakers: In both cases Oliver wasn’t a kid watching from the sidelines, he was as equal a participant in the proceedings as anyone else. And that was both amazing to watch, as his father, and amazing to join in on, as a co-conspirator.